As long as I can remember, there’s been music around me. My dad, Urban, loves instruments, and he plays what ever he gets his hands on. The living room / music room is full of instruments, from guitars, violin, banjo, mandolin, piano, accordion to more rare things like coconut maracas, strange flutes and an electric saxophone. It’s hard to not get interested in music in such environment. 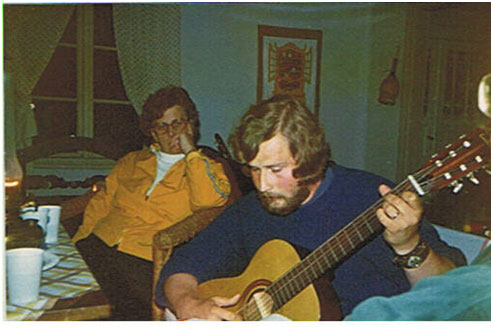 My brother Tobias was the star of the family. He taught himself piano, and started making his own songs at early age. He sang at a lot of talent shows and musicals. Here you see him posing with Lotta Ängberg after winning the final of a talent show in Skara 1987, price: 1000sek in clothes and to record a single.

My mom, Gunilla, also has a musical ear. Here she is practicing guitar with her colleges at school. They’ve done it every second week for 30 years now. Don’t know if they improved much, but they have a lot of fun.

Mårten, my other brother, started out playing clarinet. He was really good actually, until grunge appeared, and the clarinet flew up on the shelf to be replaced by an electric guitar and a big muff pedal. 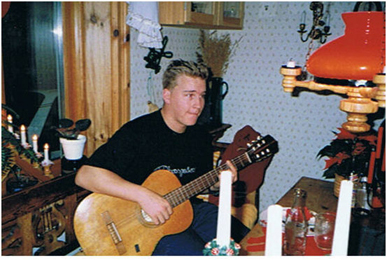 X-mas 1988. Jam session in the kitchen. Rehearsing for a gig that would take place at dad’s school. One little problem, how would I get the bass onstage? The double bass was kind of heavy for a 6-year-old kid. But Urban always has a plan, so he strapped the bass to an old canoe wagon so I could roll it. My whole family goes on stage, last and least I’m struggling on stage, I raise the bass, jump up on a chair, and the audience started clapping. The dream of becoming a rockstar was born.

In kindergarden I demanded to do a show as Roxette, and I would be, of course, Per Gessle. I got my will. Went down to the basement and made drums, keyboard and guitar in plywood and, ofcourse, a backdrop. The day came. David (or Per) dressed in new jeans and sailing shoes, hair coloured in 80’s yellow and green. All the parents were gathered. The music starts. I run on stage, but trip half the way and fall on the asphalt making a hole in the new jeans, scratching the new shoes and my hands. I stand up, and with my hands bleeding, I deliver 3 songs as nothing happened, making success a fact. 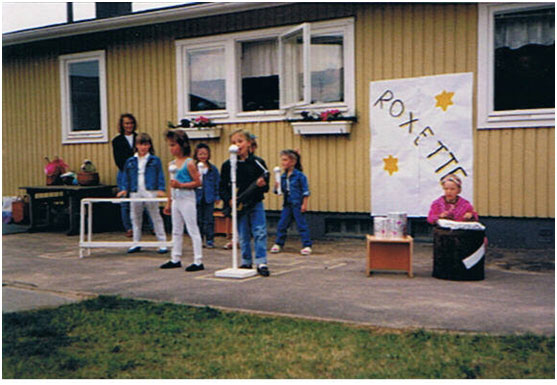 We started the First band at the age of 12. The first song we played was ”I was made for loving you” by KISS. No one wanted to sing, but after some negotiating I took the mic. Here is one of our first gigs, on the square in our hometown, a freezing cold autumn afternoon. At first we were called Exoijdis. Then Line up, then Calsium, then ZZZzzzzzzzzz….. then Switch, Serge and finally Princess Pastry…

In 1999 we started a hardcore punkband called Dead End. We released a 7” vinyl with 10 songs. What can I say? It’s Punk!!! We also released a split-record with the band Get Up and Go’ers. The records were released in the US, England and Sweden. Here is a picture of the first record: “Killing the Messenger”

In 2001 I finished school, and the band went separate ways. I packed my bag and moved to the much bigger city: Malmö, in the south of Sweden. I moved into a 4-room apartment with my childhood friend Kristofer, and took cultural studies and arts at Lund University. We met a lot of new friends, and our apartment became the place to be on Friday and Saturday nights. But it was 3 persons that always stayed and jammed the longest. We soon started a band called Lamont…

We released a single called “Rather do it”. You could download the song for free, and buy the cover with an empty cdr to burn it. The video for this song was recorded in an abandoned warehouse, somewhere in south of Sweden. We sneaked in with our Chevy van, cameras, instruments and 4 girls in matching training clothes we found the day before downtown in Malmö. The recording went well until we got the brilliant idea to set the white background on fire. I mean, how cool would it look with a backdrop on fire? We started pouring gasoline and tried to set in on fire, but it didn’t ignite. So we put more and more and…

2007, it was time for the release of our debut album ”The Golden Daze.” The record got 100.000 downloads in the first 24 hrs., and half a million by the end of the first week. The streaming of our video clip —The Golden Daze— collapsed Voddler’s server on the night of its release.

This couldn’t be better. We went on tour, played on several TV shows and  radio stations, and interviews were flying in.

We shot our second video clip for the record, an old classic song loved by those who followed us from the first days: 45 minutes. Right before releasing the 2nd single, the other members of the band felt that the journey was too stressful. They decided to take a break which led to never playing again. I felt empty; the most important thing in my life was gone in one second.
I moved to Stockholm, studied music production and opened my studio in Södermalm with C.G and Tom, two fantastic friends and super talented musicians. Naturally, songs just started flowing again, one after the other. Ready for duty, I put on my bass and, once again after some negotiating (this time with myself), I grabbed the mic and let DAVE CASTALDO come on stage.